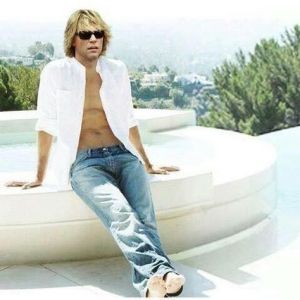 I was going to share everything.
After all, I am just like Nikki Sixx, an open book.
And as far as I have secrets, I review them regularly, if they still require to stay hidden.
Usually they don’t.
They re just my ego telling me I won’t be loved and successful if I share that side of myself.
When really?
Does the world need another great pretender?
Rip the band-aid.
Bare your naked soul to the world, as my favorite online coach Katrina Ruth calls it.

In the context of taking honesty to a whole new level, I was going to share this weekend’s stunning photos of Jon Bon Jovi in a crispy white shirt, which were taken on Saturday.
It was at an annual fundraising for the Apollo theater, and the photos bore the mark of Getty images and the photographer.
However.
Because the mark was always on the right of the photo, and Jon Bon Jovi was always standing, watermark-free, on the left side, I was already doing a decent job cropping him out, to make a collage with the older one;
A photo of Jon in a crispy white shirt last Saturday and a 90s (I think) photo taken by an anonymous photographer. Also of Jon in a white shirt, sitting by the pool.

Until I realized this is how I could get into trouble. By using photos from a press agent.
It took until I clicked on a version that had actual price tags onto them, before I snapped out of my Paint job and was like:
“You know what? I ll blog with the anonymous, retro shot of Jon Bon Jovi at the poolside to make my point.”

In case you need a visual of the pictures that blew my mind this Monday morning, just read on we’ll get to that.
I didn’t see current-day Jon in white shirt on the official press release of Getty Images, nor on the website of Harlem’s Apollo Theater.
I saw them on a Facebook page for Jon Bon Jovi fans.

Now, this in itself is a small miracle because I don’t spend much time on Facebook. The only social medium I like is Twitter, because it allows much better conversation, and is based on your personal interests. There is also less censorship on Twitter, it’s an adult thing, and you don’t have to use your real name.
You click with other people on mutual interests, it’s as simple as that.

Facebook gets about half a post to seduce me to spend time there, before I click to my notifications and start handling my messages and my pages.
Half a post, that’s all.
Today the JBJ fan page hit me with this one.
(For the fans check post 2, which has the other photos taken this weekend)

The specific current-day Jon Bon Jovi in white shirt photo that blew my mind was this one.

It really was so profound that I found myself kind of needing to process that, and it slowed down starting my day. It was impossible to think about anything else until I knew WHY I liked looking at Jon Bon Jovi so much.

And what is it then, this mysterious thing we call male beauty?

The last question was a good one to ask my mother, because she’s always much quicker in determining it. I even have a case of my mother saying someone was beautiful, and me simply laughing about it.
And then becoming completely smitten later on.
She knows stuff.
I don’t, not before he has already done his enchanting work.

Together with my mother we came up with a few characteristics.
Teeth, hair, and overall attitude.
I was the one adding “teeth”.
How he holds himself was definitely numero uno, when it came to being an attractive man.
Great teeth, great hair and a strong on-screen and off-screen presence, are as much part of current day Jon Bon Jovi, as they were his traits on the undated photo near the pool.
So nothing new there.

And then it hit me!
This is a cookie jar thing!
Beginners mistake!
But let me explain.

If you re on a diet and you refuse something that is offered to you, for example a cookie from the cookie jar, this costs energy, causing your willpower to plummet.
If after that somebody offers it again, you will not only take the cookie. You ll probably take two, three or a two fists full of cookies.

And in that light, it suddenly made total sense that my Monday morning had a startup delay from one current-day Jon Bon Jovi photo in a white shirt.

Because a week ago, someone sent the first retro shot of Jon by the pool, to me and I tried to resist.
I tried to pretend that barefoot Jon by the pool with his shirt open, was something I could also not swoon over.

Please note that this whole “acting like a grown-up” pose, was taking place during my Rock Star Yoga fallout.
[*note: in 2019 the blog was called Rock Star Yoga]

I was not practicing yoga.
I was not writing for this blog.
But I was super busy wondering where the inspiration went.
(where do you think? could it be sitting by the pool perhaps?)

Pondering over why was I no longer caring for doing yoga to Bon Jovi music and then write about it.
(Uh, maybe because you’re ignoring that cute photo?)

Inspiration did come to me during that fallout from doing yoga or writing for this blog.
Yet in hindsight?
Oh, it came more than once.

But I thought it was inspiration that wasn’t fancy enough to share here. I didn’t want to be the weirdo yoga teacher who only practices if she feels inspired by male rock stars.

So I said “No” to the cookie of letting Nikki Sixx inspire my yoga and Rock Star Yoga blog; I said “No” to Jon by the pool inspire me;
And I tried to take the edges off, by taking that inspiration over “to the other side” of my blog under my penname.
The non-fancy side.

I had no more willpower left to resist and let it have me.
Thought about it for as long as I needed to think about it, which was one Monday morning.
And then I wrote this long blog post about the stunning appeal of Jon Bon Jovi wearing crispy white shirts.

Moral to this story?
Take the damn cookie.
And take it the first time.

Captain Crash and the Beauty Queen from Mars is a Bon Jovi song from Crush (2000)
And was played on almost concerts on their most recent tour.