With my last yoga practice, over a week ago, I made two mistakes.
One was to even have a yoga practice, even though it was already 11 PM and I knew I would want to write about it as well.
[*note: in 2019 the blog was called Rock Star Yoga]

This resulted in going to bed at 4 AM.
Yes, I had done my yoga, and nourished the soul by writing about it.
But I had also completely wrecked my biorhythm.

The second mistake was that I was doing yoga listening to a Bon Jovi concert on YouTube, on my phone and  accidentally looked at the screen mid-practice.
I was immediately hooked and couldn’t put it down anymore.
In my defense: It was sleeveless-Jon.
Someone who rarely gets a No from anybody regarding anything, and this was no exception.

I couldn’t take my eyes off of him and finished my practice placing the phone on strategic places watching the show, as I went through the moves.
You can read about this first time doing yoga while watching a concert here.

I learned from the first mistake, in the sense that I now didn’t practice yoga at midnight anymore. In fact, I didn’t practice it at all.
But ultimately, after I got over the initial crankiness that I had lost my yoga practice yet again, I realized it was time well spent.
Because I was still holding back.
It was still not right.

I had invented Rock Star Yoga;
A method where you design a self-practice based on who you really are and what you really like to do. But in no way was I hurrying to my mat, the way I hurry to my computer to write out a story that I have in my head.
I wasn’t spending every waking minute on my yoga mat, the way I watch Nikki Sixx interviews on YouTube while doing the dishes.

Soon after my 4 AM yoga bender, yoga dropped off the list of Things I Really Wanna Do, where Nikki Sixx now dominated place 1, 2 and 3.
Even Jon was, for a day or four, nowhere to be found, although I still listened to Bon Jovi music.
But my personal obsession with him was definitely less prone, and I knew this also kept me from going back to my yoga mat because my entire rock star yoga practice (so far) had been based on listening to Bon Jovi during yoga, and because I was in love with Jon this worked really well.

Now that I was in love with Nikki Sixx, things had come to a halt.
Things?
Yoga!

My own homemade Rock Star Yoga, which I was sure would inspire me for the next 20 years, just like Madonna had gotten me through the first two decades,
vanished the moment Nikki Sixx entered my heart.

It’s a long story how he got there but he was there now, and I spent the week largely writing about Nikki Sixx, and all the sexual feelings he stirred up.
I did this for my other account, my pen name, and this is what did get me up every morning, hungry to start writing.
And that’s how I learned my lesson.

Because unlike other yoga teachers, I do not believe that doing yoga should be a discipline. Something that you may feel like doing one day, and maybe not the next, but that it doesn’t matter because you have discipline, and you do it anyway.
Or they do it anyway.

Because to me, there is a difference between yoga and penicillin.
Yoga is like writing.
Yoga is like sex.
And therefor the only correct way to do yoga is if you just can’t NOT do it.

If you don’t care how many appointments you have to cancel, how many hours of sleep you have to miss. If the thought of not doing it is simply unbearable because you just want it so badly.
Until you feel that?
You re trying to make things happen, and it’s not Rock Star Yoga.

And it wasn’t just the yoga that I had screwed up, because I wanted to be a polished disciplined version of myself that I am not.
The writing too, for this site, was not the right from the heart, unfiltered, non-tampered, style that I had been using for my penname account.

So it became clear to me, that the key was in how much liberty I gave myself in writing under the other name, versus restrictive I was when it came to this account and to doing yoga.
As long as I would hold back even a little bit, it was never going to work.

For example:
I initially didn’t even give myself permission to switch my affection from Jon Bon Jovi to Nikki Sixx, because it “messed up this site”.

Same with yoga.
There really is only ONE way to do yoga!
The way I want it, when I want it, and how I want it.
And this may change every day, just like my writing under my pen name changes every day.

I cannot afford to hold judgement over whether or not it’s a bad thing that I watch the screen when I practice or not. 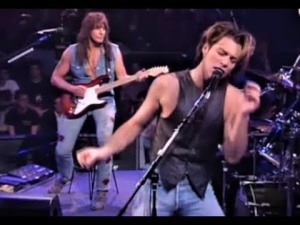 Tonight’s practice, with a 80 minute video A Night With Bon Jovi (1992, MTV) started out not looking at the screen.
But then there was a behind the scenes intermezzo, and I just couldn’t contain myself and had to watch.
And poof!
Gone I was! Again.
Hooked to watching.

But this time I was no longer ashamed. I was grateful. So grateful to live in this age of technology, and free concerts to watch. Grateful that I could watch this band in their prime, and let their zest for life infuse my practice.

Over the years I ve studied at least four yoga lineages, who help women to stay young and their sexual organs healthy.
One of them is even officially called:
Hormone yoga.
(!!!)
These yoga methods for women’s health are legit, perhaps even evidence based. If you teach them or practice them you belong with the Pros. The people who take yoga seriously.

Rock Star Yoga is about letting all of that go.

Not the soulless, lifeless version what everybody else says you should be doing to stay young and fit and healthy.
Look for the overwhelming desire to do it, or as Charles Bukowski said on writing:
“If it doesn’t come bursting out of you
in spite of everything,
don’t do it.”
and
“if you have to wait for it to roar out of
you,
then wait patiently.
if it never does roar out of you,
do something else.”

Don’t do yoga unless it roars and comes bursting out of you.