At the risk of being expelled out of Bon Jovi fandom, and for good reason this time ;), I have never gotten my head around listening to Richie Sambora.
Regardless of how many times I was blown away by a live guitar prelude to Wanted Dead or Alive.
Or all the times he sang “I ll be There for You”, and in my opinion had earned the right to always be the one singing that song.
Regardless of how many times I was swept off my feet by HEAVEN HELP US ALL!!!!!
Oh God what a good song.

Anyway, despite all of those things-
Oh, and also, despite all the proper Bon Jovi fans (the ones who do not self-proclaim to be musically dyslectic, those ones) being solid disciples of the man, and his 1991 album Stranger In This Town being a musical version of the bible;
I simply could not get into Richie Sambora’s work the way I knew I was meant to.
Because I like his voice, I like electric guitars, and I like the blues WAY more than alternative, pop, and country. I like the blues more than protest songs, I like it more than meaningful singer songwriter-y types of things.
And I like Richie’s guitars because I think they will bite your fingers off if you play punk or ska on them, but maybe that’s just my imagination.

But all in all there had been ample signs that told me I would love Richie Sambora’s music and yet…
Not today. And the not-todays became years.

One week ago, hAnD90 uploaded a remastered 2012 Richie Sambora concert, with live chat, and because Today still had not come, it was one I knew I could skip.
Although unfortunately, there were also more personal reasons why I had to keep a way lower online profile than I found professional or desirable.
But yeah.
The fact that it was not a Bon Jovi concert but a Richie Sambora concert, whose music I hardly knew, did make it a painless decision to let the premiere of that video just pass, without joining in on the live chat.

Anyway, all those things, I m just reconstructing them for you here.
Because they surely were not on my mind this Sunday!

I’m almost at my one week mark of being sick. It’s a common cold, but the virus-low Covid years combined with the fact that etiquette around public sneezing and coughing has changed dramatically since 2019 for sure;
This common cold has already trashed one week worth of premium appointments and dates!
Including sex!

I also did not film any videos for any of my 3 YouTube channels, but that was a minor setback, compared to the havoc the cold created in my personal life, to be honest.

And God knows how many more perfectly good parties, workdays and get togethers I will have to give up the upcoming week, before I can finally take part in everyday life, in a crisp and clean way.

So all in all, this Sunday was not dedicated to finally hitting it off with Richie Sambora.
That much was sure.
Or was it?

Because I just ordered Richie Sambora’s 1991 album Stranger In This Town.
I did enough research to be able to tell you it has a 99% Google rating of people liking it.
The 2012 Richie Sambora concert is blasting through my headphones, and I have devoured the well-written description box below the concert video as if it contained the secret to life. That’s how eager I now am to know everything about Richie Sambora.

And also! Where I have always felt kind of uncomfortable to admit that if Richie Sambora would go touring, I would not know if I d go?
I know I ll not just GO! But PAY whatever it takes!
If it were the 90s I d sit a night on the sidewalk of the local record store to purchase tickets. So after all that time, I am finally, a Born-Again Richie Sambora fan!
With her musical bible, the album, “Stranger In This Town” on the way.

The reason this all happened and that this day had such an unexpected turn, is because I wanted to indulge in writing about something sexy.
After a week of my most intimate relationship being the one with a box of Kleenex and Thyme syrup, I was going to indulge in treating myself to writing about Zalman King movies.

Now, Zalman King movies are in general not very highly rated, because they are always about sex. And not the art house type, but the soft-focus, Emanuelle-type thing.
Do you know Emanuelle?
Loved those ones too so much…. but they were 70s and early 80s. Zalman King’s movies featured in the late 80s and 90s.
His two most famous movies are 9 1/2 weeks and Wild Orchid, but my favorites are Two Moon Junction (1988), which you can still see on YouTube if you have an age-verified account, and Delta of Venus, which they very unfortunately took down recently.
It wasn’t until about two years ago, that I realized all those wonderful movies were made by the same man, and that he was also responsible for my absolute favorite series of all time;
The Red Shoe Diaries.

Now I haven’t seen any of those episodes back since then, so I m relying on a three decade old memory here, but The Red Shoe Diaries was about (and I m not going to Google it, to keep it real here!) a journalist or writer played by David Duchovny, who placed an ad to hear about women’s sex stories and then they all started sending him letters.
With his voice over, and the female voice over from the woman telling the story, every episode revolved around one story.

When I started investigating Zalman King, after finding out I had such an instinctive fondness for his work, I found that there was little “irrelevant” about his work, really.
Because they all had had the same theme:
They had all been about women’s sexuality.
A theme that has got millennia of repression to catch up on!
(plus one week)

Making this a wonderful theme to write about, to bring at least some zest and sparkle to these days when I saw my bed way too often and for all the wrong reasons, I sat down to write about Zalman King.
For starters I was going to look for the music from The Red Shoe Diaries, to listen to.
Music that would bring me in the mood!
And I found a playlist that was titled after the Red Shoe diaries, but it appeared to be broader because it also had music from 9 1/2 weeks on it. But that was not what stood out for me;
This list, which the maker claimed was a soundtrack to The Red Shoe Diaries, contained two Richie Sambora songs.

Wait what?
Richie Sambora made music for The Red Shoe Diaries?
Are you joking?

Since the list was a bit of a hotchpotch with music from other Zalman King work as well, I knew his songs could be from one of the movies as well. But that would also come as a surprise me.
So I dug into that new finding, instead of diving into Zalman’s King work. Which was probably the better choice, considering I wrote the previous paragraphs Wiki free. I think I ve already studied Zalman King to a level that greatly extends the Minimum Rock Star Writer Requirement!
Whereas the work of Richie Sambora has been lacking in my knowledge, and I know it.

And as it turned out, the list had been correct!
There are indeed two Richie Sambora songs on the original 1992 Red Shoe Diaries soundtrack:
You Never Really Know
and
Rest In Peace.

I have recreated the album, soundtrack to Red Shoe Diaries on my YouTube. Richie Sambora’s “You Never Really Know” is number 4 on this list and “Rest in Peace” the final track. 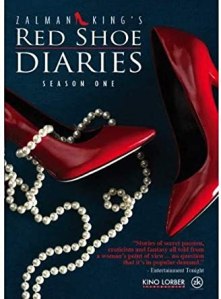 But it got even better!
Because as I threw “Richie Sambora You Never Really Know” into Google, it gave ONLY the Red Shoe Diaries album, as its source!
No other album!
Rest in Peace is the opening song to Richie’s 1991 album Stranger In This Town, but You Never Really Know?
Never featured anywhere else.

A few years ago, I wrote a blogpost about 5 Unexpectedly Sexual Bon Jovi songs. One of them was a Richie Sambora song River of Love.
And in the paragraph about that song, I said:
“I don’t think any fan has any doubt which one of the two front men possessed the “raw, untamed power”, as Star Wars put it.”

Right now I m still listening to Richie Sambora singing his heart out in These Days, the Munich 2012 concert.
And rereading that post about the 5 Unexpectedly Sexual Bon Jovi songs.

In retrospect, I don’t think I would have chosen the Star Wars reference there. It gives a bit of a shock, in a post solely about erotica and Bon Jovi, don’t you think?
I m not sure, if that was a good thing, or a bad thing. Then or now in this post…  Zalman King would not approve.

But it no longer surprises me that Richie Sambora had two songs on the soundtrack of The Red Shoe Diaries. With that raw untamed power, that made it into my top 5 Unexpectedly Sexual Bon Jovi Songs.
Of course his music made it to Zalman’s soundtrack.

And three decades later, it was how I finally connected to Richie’s work.

Subscribe to the blog, to get these posts in your mailbox.
You can find the subscription button on this page, probably somewhere on the right.

You can find my books The Little Mistress Who Turned Into A Baby Koala
A Boyfriend Like Jon Bongiovi
and White Tigress Yoga Workbook
at the bottom of this page: https://www.lulu.com/spotlight/rockstarwriter

If you live in The Netherlands, Belgium or Germany, you can also order these books from me – just go to the bottom of this page:
https://www.lulu.com/spotlight/rockstarwriter
to check out which ones you want, and write me an email at s_beenackers@hotmail.com.
Payment is via PayPal or bank transfer.