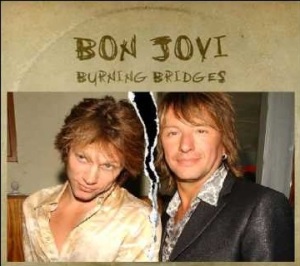 I always thought Bon Jovi’s 13th album Burning Bridges (21 August, 2015) and their fourteenth This House Is Not For Sale (in shorthand “THINFS”) had been released a lot closer together.
But due to THINFS being pushed back, they were ultimately over 14 months apart.
Months which were spent rebuilding 50% of the bridges which were commemorated on Burning Bridges.
Unfortunately, this was the 50% where Bon Jovi had split with their record company.
Not the 50% where Bon Jovi split with its other front man, Richie Sambora.
which will probably always remain an enigma, although I do think they will get back together.

The song Burning Bridges and the album with the same name, were their goodbye to Mercury/ Universal Music after a 32 year collaboration. But they kissed and made-up, as Jon put it, and fourteen months later THINFS was released by Universal again, this time on their label Island music.

In a clip I found on YouTube (sound-only) Jon cryptically referred to Burning Bridges as their latest record, but not their next.
They didn’t release singles from Burning Bridges, there was no art work, and Jon delivered it in a brown paper bag.
Since I assume files are sent digitally nowadays, the picture of Jon delivering the master tapes in a brown paper bag to Universal manually, could be him exaggerating.
But I don’t know.

But Burning Bridges, although low-key presented as an album “for the fans”, was not a bad album at all.
And without any videos or art work, it had a nostalgic bootleg feel to it.
The fans loved the songs, and I’m your man is a personal favorite of mine.
And the band itself loved the song We don’t run so much, that they put it as a bonus track on their next album THINFS.

We don’t run, that song that was on Burning Bridges, but brought over to their next album as well,
has also been played throughout their entire THINFS tour (2017-2019).
So Burning Bridges wasn’t a bad album.

The song We don’t run contains a direct referral to the album Burning Bridges:

I’m not afraid of burning bridges
‘Cause I know they’re gonna light my way
Like a Phoenix, from the ashes
Welcome to the future it’s a new day

from the song We don’t run (live)

Today I used the album Burning Bridges as the soundtrack to my yoga.
And it reminded me of a somewhat related story, about the rebirth of my yoga practice.
In July 2018 I quit teaching groups, closed my yoga studio, and looked forward to practicing yoga just for myself and start enjoying myself on the mat again.
But none of those things went as planned.
14 months later, I still own my yoga space for teaching privates, but I didn’t really get my mojo back for my home practice.
Not until today!

Today FINALLY after 14 months, “it’ dropped.
Just like the THINFS album, my renewed home practice, Rock Star Yoga, was born much later than I had anticipated.
As if the release date kept being pushed forward, because it wasn’t done yet.

We often think we can speed new things up by marking the ending of the previous.
But it cannot be rushed.

Fourteen months is a perfectly normal time frame, for a band to reinvent itself after marking losing Richie Sambora who had been with the band for thirty years.
Just like fourteen months was normal for me, after quitting teaching after 15 years.
You can’t whip yourself into a new, finite shape, no matter how much you would want to.

“The Burning Bridges record is our latest.
It’s not our next.
This is sort of the end of the cycle. Not the beginning of the new one.
2014 was a pretty traumatic year for me. And I’ve come through it. ”
Jon Bon Jovi, July 2015

When Jon Bon Jovi started giving promo interviews for THINFS, late 2016, he said he had had three very bad years.
Counting 2015, the time of Burning Bridges, as one of them. He wasn’t done yet; All he had done was burn the bridges.

No one knows how long it will take for a new band, a new yoga, a new life, to rise from the ashes.

But for the lucky ones, it’s fourteen months after burning the bridge.